Speculation abounds about who is responsible for yesterday’s drive by shooting, which killed a russian opposition politician. While Western mainstream media are steadfast in that “it must have been Putin”, their russian counterparts point out that – given the circumstances -, it would have been of no use for the grandmaster of power chess. I am not so sure about that any longer. The murder could serve as a trigger for a power struggle.

This is, what I wrote previously and I stand by it. First I wondered about the scenery, where the Nemtsov murder took place. It is a highly recognizable one – even for a tourist, who had visited Moscow many years ago: Basilius cathedral, Red Square, GUM, the Kremlin walls, etc. As if a dead body was found at the doorstep of somebody’s home. The body of a known enemy that is.

It’s as if a known critic of the American president was killed at 1600 Pennsylvania Avenue, in front of the White House. Who would say in all seriousness, that it had been the sitting president who had him/her assassinated?

It would be crazy to suggest such a thing in the first place and for sure there would be no American to advocate such a theory.

The same applies to Russians. They would not put Putin past having ordered such a crime – but no, not at his own doorstep! The president might be unscrupulous (“as is his job”), but he is not dumb !

For everybody, who is aware of provocations/false flags, it must smell like one of these.

As one western commentator put it: “Caught: The CIA at it again.” 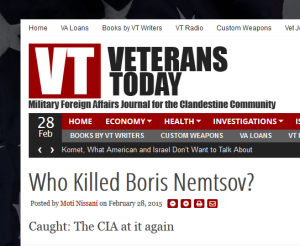 This is, what a big majority of Russians think and what one is led to believe by the high visibility of the crime scene.

As a prorussian blogger points out: “Putin warned about exactly this type of ‘false flag’ two years ago.” And indeed – look at this video (there are english subtitles – look for it !):

This is the point, where one could get skeptical.

Sometimes the suspect, at whose doorstep the body was found, turns out to be the real murderer. Despite the fact, that an allegation of this kind would have been blatantly absurd.

For the Kremlin this murder could have had a purpose and a rationale as well.

For months now Moscow has been chock full with narratives about an impending battle between Putin and prowestern “liberal” forces, which are said to be deeply engrained in Moscow’s power structure. The same persons, who are now promoting the false flag theory have been predicting all the while, that a “fifth column” will try to produce a Moscow Maidan, oust Putin & the silowiki and install a prowestern puppet regime.

If their projection holds true – and I think it does -, an assassination like this would fit in nicely – for both sides. It could be the starting signal for the infighting.The Moscow Maidanites could try to kick off the inevitable power struggle on their own terms.

The same goes for Putin & the silowiki. If everybody in Russia believes in a false flag, all the security apparatus has to do is to find out, who the perpetrators were (and do so credibly). And for sure they would find the provocateurs.

And don’t get me wrong: it very well could have been a false flag, abetted by the “fifth column”.

The FSB just could have let this happen. An assassination can act as a forceful catalyst to purge and tidy up a bit.

Edit, 2015-03-01: I don’t think I am fuzzy. It could have been a true false flag and it could have been a false false flag. And in both cases the Kremlin could have been in the driver’s seat. What’s fuzzy about that ? About the morality of having one man killed: It may sound cyinical – but if you think, that infinitely more is at stake, it may look like a slight sin. Certainly it is a far cry from having 300 innocents killed.