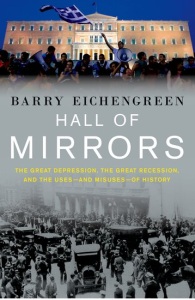 If you reread Eichengreen’s early Euro scepticism, you know that he was not afraid of taking a controversial position: In 1992, when everybody else was aroused by the prospect of a common currency, he put his finger on the weak spots of the project. In his new book Hall of Mirrors Eichengreen compares the 1930ies with 2008/09 and ends up hailing today’s conventional wisdom: that QE and deficit spending are beneficial, because they have so far prevented a ’30-style collapse. But the Fat Lady has not sung yet.

Eichengreen claims, that the initial success of avoiding a collapse has morphed into the failure to achieve more and to kill the crisis dragon once and forever.

The first quick response to Lehman Brothers – troubled asset buying (and thus pouring gasoline into a raging fire) – was righteously aggressive and the same applies to the ramped up public deficits in the immediate aftermath.

But then the politico bunch decided to lean back, abstain from reforms and to resume fingerpointing at each other. In America and Europe alike, for financial as well as for labor market reforms.

According to Eichengreen this is why there will be a next crisis.

In his opinion government/central banks are able to manage the fall out of a credit crisis and postpone its consequences indefinitely – provided that things are done skillfully.

Apparently there are no costs attached to inflating the monetary base (at least he does not talk about them).

Asset purchases by a CB are by definition a “commitment to avoiding deflation and of shaping market expectations” and have nothing to do with creating new bubbles, the propping up of bank balance sheets or arbitrarily concentrating wealth in the hands of a few owners of certain hand-picked assets (government bonds, some shares/stock markets).

Hell, no ! So far there has been no consumer price inflation to speak of, deflation has been successfully averted and (nearly) everything is fine. This is, where one starts to suspect, that some sort of myopia must be at play.

Undoubtedly this star economist is a big fan of Quantitative Easing Bernanke style. His central criticism of unconventional US monetary policy is, that the Fed has embraced this concept only hesitantly.

Now the ECB has to overcome its qualms and they should should go all in: “You don’t fight deflation with baby steps.”

Eichengreen seems to be a bit disappointed, that despite his early criticism the Euro has not fallen apart yet (it is not by chance, that syntagma square adorns the cover of his new book). And how right he has been with some of it! (It only begs the question, if it is apt justification for pushing for financial/political unification even harder).

In the above mentioned interview with an Austrian newspaper, Eichengreen points to the predecessors of today’s Quantitative Easing and this turns out to be a very revealing moment. 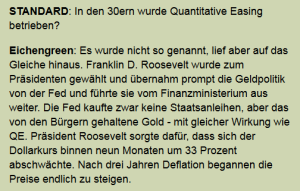 “they did not call it like this (Quantitative Easing), but it was basically the same thing. When Franklin D. Roosevelt was elected president, he immediately took over monetary policy from the Fed, to pursue it from the treasury. The Fed did not buy government bonds, but it acquired gold from the citizens. It had the same effect as QE. President Rooosevelt took care of the dollar exchange rate, which went down by a third within nine months. Eventually, after three years of deflation, prices began to rise.”

But there’s much more to that story.

First of all it was not simple purchase, but a confiscation, forceful action by gubbermint to prevent the “hoarding of gold”. Gold was base money at the time and the US money stock was backed by 40 per cent physical. Everybody who did not give up his gold, could be punished by up to 10 years in prison. The Fed payed 20,67 dollars for an ounce (of course in paper money).

This facilitated the expansion of money supply, pushing down interest rates and leading to the above mentioned depreciation of the dollar. Nine months after the confiscation, the Fed hiked the price of gold by 70 per cent to 35 dollars…

Now – that’s what I call robbery by government. It makes clear, that this kind of quasi QE had a price tag in 1933/34 and that today’s QE has one as well. And that it is citizens, money users who pay the price.

Eichengreen’s example also shows the limited nature of a recovery by QE. Yes, there was some temporary improvement in unemployment rates and GDP. But the economy took off only after the onset of a big war. Please have a look at the charts in Wikipedia’ article on the Great Depression:

If this is the historical case that can be made for QE, well you know….