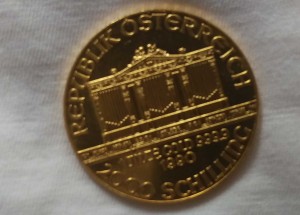 Another bargain after two months. My well to do friend decided to have a go after last week’s decline in the USD POG. Right now the dollar price nearly is where it was, when my friend stepped into the physical market last time. Difference being that the Euro is stronger now-  and this is why R. managed to pick up some phys ounces at a considerable discount - minus 6 % compared to july.

He fell short of reaching a three digit handle though

R. tried several times to no avail – but so what ? He is prepared, that this thing will go on until all retail distribution channels are cleaned out – as should be everybody. It can take time.