People asked me to give a short introduction to this blog for a (predominantly/exclusively) English reading public. This is a fair request, all the more bc. I intended to write more in English, when I started out 1,5 years ago. Since then the range of my commentaries has broadened substantially and many of them are what one could call “Querfront”. Which could mean, that they combine seemingly irreconcilable positions. Some would label it heterodox, heretical. My partner once called it against everything and anything other people accept as true.

This, of course, was shere polemics.

Even worse, the german term Querfront is used with the intent to disavow. Historically Querfront means proto-nazi, a fusion between nationalism and socialism.

So what are these positions?

You could pigeonhole one of them as nationalistic as in: against european integration by lies and deception.

The predecessor of this blog was a text of 300 pages, which never went to print. Its title is “Coup d’Etat in slow motion. How ‘Europe’ kidnapped the Republic of Austria”. This was the cover, my cousin Bettina made (thanks again): 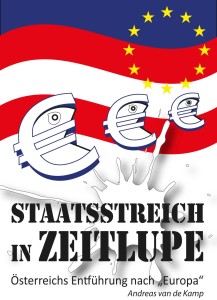 Staatsstreich only covers small part of a much bigger story, as this kidnapping by a supranationalist cartel took place in nearly every European nation.

Consequently I am highly critical of (not only) my country’s political elites – as it was them, who facilitated this kind of legal overthrow.

Some say, that I am pro far right (“rechtsextreme”) FPÖ, but I don’t care. In my eyes FPÖ is a run of the mill political party, which may or may not have braune Flecken (Nazi marks), as do other parties.

The most obvious common ground between them and me is the rejection of European integration as practiced in real life. In Austria FPÖ politicians were systematically excluded from government and therefore had no opportunity to take part in this botched “european integration”.

Admittedly I also share a lot of their positions in migration matters, those with a common sense approach.

The failures of the rest of Austria’s political class are so numerous and threatening to “society”, that they have become a risk to the survival of the political system as a whole.

I am also highly critical of main stream media, where I spent 25 years of my professional life. There are good reasons to call them lying press, although

I think, I know much of the media’s inner workings and their standard procedures and that is why I very much distrust them. Nobody in real life media gives a fuck about their supposed role in a democratic system, nobody I know of.

I take offense at the widespread antirussian sentiment and I think it is Moscow, whose strategic interests are being constantly overlooked.

Economically this blog has very anti-statist leanings, mostly inspired by the Austrian school of Economics and/or by libertarian economists. However, this does not mean that I am always and at all costs pro free trade. I am what is sometimes ridiculed as gold bug, although I do not expect the return of a gold standard.

On a final note, I am a “climate denier” or to be more precise: I do not think much of carbon dioxide as the sole or at least predominant climate driver.

For officialdom, media and the broad public this is dogma, which cannot and must not be called into question. For this blog its only a theory, based on correlations and unfathomable model calculations.

I suspect it to be a (european) narrative to mask (and form) the coming demise of our petroleum production system, which has been the basis for western civiliation for the last 100 years. The real peak oil is the break down of net energy, unfortunately without us having much help from renewable energy.

This perspective I share with a broad range of people from energy sceptics to hardcore collapsniks. Most of them however disapprove of my supposed climate denialism, my sober, down to earth approach to renewables, the insistence on retaining access to high net energy sources like natgas or coal and – of course – my “neoliberalism”, whatever this might mean.

On the other hand there are my Austrian School friends and my Comrades in Golden Arms, as Jim Sinclair likes to call them. Many of them cannot imagine that there are things, which cannot be fixed by a high enough price and this is, why they do not want to entertain the idea of say: peak oil.

They say, there is lots of oil underground and of course they are right with this, except that there will be no motivation to produce it, when the oil’s EROEI is negative, energywise.

This is, what “sitting on the fence” means. In German there is an even better idiom: “zwischen den Stühlen sitzen”.

This is, what this blog is all about.

PS: Oh – and no, you are not able to post a commentary here. The main reason for it is, that it is not possible for me to police the postings. If you want to give me a feedback or make a suggestion please send me an email at andreasvandekamp(att)gmail.com. Thanks!