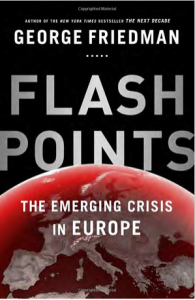 In his new book George Friedman, chairman of a private US intelligence enterprise, looks at the fault lines in the European Union, the financial crisis has brought to the fore. In his opinion today’s union consists of four parts, three of which are opposed to Germanys philosophy of austerity. Standing alone against the rest of the pack and being forced to waive her financial claims, Germany could very well turn to Russia as an ally.

George Friedman may be a former spook of some US (or Israeli) intelligence arm as I happened to think at the very beginning. But even if this was true, it would be the wrong mindset to approach Friedman’s recently published Flashpoints. The emerging Crisis in Europe. There is no discernible connection between the interests of those organizations and what Friedman writes.

He is the founder of stratfor, a consulting firm, somebody once called shadow CIA. It provides businesses with information about where to invest and what to expect from the future, supposedly on an open source intelligence basis.

His new text is not an information operation, nor is it the quick fix concoction as one would have expected. It is a resourceful snapshot of Europe’s position and role in geopolitics; nothing which could be cooked up after having spent some weeks or months in a reading room.

Having said that, there are a few shortcomings/different angles to those I would have used. The most glaring one being the US herself, the country, which welcomed Friedman’s jewish-hungarian family after fleeing the Soviet proxy regimes; it is the country, where George was raised and where he has made his career.

For Friedman the US has stayed the same ever since the end of World War II; the same entity, his family had migrated to, a benevolent power, whose preoccupation with (and fervor over) european affairs has diminished since those days.

I do not agree with this view. For me the US is the global hegemon, working with a strategy of controlled chaos – and this is exactly, why the States have maintained a lively interest in Europe and its eastern borderlands.

Because that is, where their global competitor is situated (Russia is definitely more than regional power, it’s a challenge both to global military dominance and petrodollar.)

In his assessment of the Federation’s current behaviour, Friedman seems to be of two minds. On the one hand he acknowledges its wish to recreate a buffer zone between herself and the peninsula to the west. He even writes, that Russia currently has “retreated to the borders it had before Peter the Great expanded the Russian Empire”.

On the other hand Friedman seems to presuppose, that Russia is expanding her sphere of influence and that she wants to claw back, what she lost after the collapse of the Soviet Union, thereby endangering the sovereignty of newly independent states in the borderland (which is in my mind doubtful or needs at least a big qualifier).

This is not, what has to be read into the ongoing conflict in Ukraine. This fight is a defensive struggle (from the part of Russia) to retain what has been left from SU’s former “backyard”. There is little evidence for a renewed appetite for the Baltics, Poland or Hungary (apart from selfserving NATO propaganda).

What Friedman tells us about the state of the European Union is not “pc”, at least not within european countries and their supranationalist political and economic elites. Some of it might be bs right away or it is much too simple (like his contention, that up to 2008 everything was fine and dandy and that Lehman Brothers and the war between Russia and Georgia changed everything.)

But in many regards Friedman seems to be spot on.

He is right in that the crisis broke Europe’s unity (i’d say: the semblance thereof), that especially with the enlargement processes in the east the EU “looked (increasingly) like NATO, excepting the US”, that the real losers of the european crisis were the blue and white collar working/income generating classes in the south and that the crisis brought with it the reemergence of Germany as (peninsular) Europe’s dominant power (without the germans themselves consciously aspiring a leading role.)

(And sorry, Mr. Varoufakis: Mr. Friedman’s perspective on this is a lot more convincing than your murky preferences, Germany was allegedly granted after WW II. This is the third time after 1871 – 1914 and 1918 – 1939 that the teutons have come to a prominent position !)

By now the EU has splintered into four parts: Germany-Austria, Northern, Southern and Eastern Europe, with only Berlin playing the advocate for solving the crisis by means of fiscal austerity (borne by others).

This will tear Europe apart in the end (even in former books Friedman expected a return of european nationalism). “What emerges will leave Germany stiffed on the debt, assert Germany and its German partners in their countries to be the guilty party, and seize and redistribute assets.”

Germany would react with renewed commitment to political and military strength, looking for Russia as an ally. Which in turn could alienate new (and not so new) nations in the eastern borderlands and maybe strain Germany’s relationship with France.

“Germany is still deeply committed to its relationship with France, but their interests have diverged. France has high unemployment and wants to stimulate the economy even if it means inflation. Germany remains committed to a strategy of austerity. (…) A more likely scenario is increasing economic tension with France, with France looking more and more to Africa and the Mediterranean, and an attempt to align with Russia (from the part of Germany).”

This prediction is not a first. Friedman has expected Germany to side with Russia at least since his 2009 The next 100 years (when he predicted another full blown new cold war !). Further on he sees a global war toward the middle of the 21st century between the US and a coalition from Eastern Europe, Eurasia and the Far East, appearantly with the participation of Germany.

Well, I am not so sure, that France would stay out of a eurasian alliance. I bet, Berlin would try to get Paris enter the band wagon, at least initially. A move like this would be villified as a re-enactment of the Hitler-Stalin-Pact and the inclusion of France would be an antidote to this.

Certainly a shift of allegiances like this would be a very dangerous thing to do, but it would have the potential of turning into some kind of Europe of Fatherlands. I doubt, that de Gaulle would oppose it if he was alive at this point in time. For him a predictable Russian Federation probably would be different from Stalin’s Soviet Union in the 1950ies.

Be that as it may – I admit, that all of this could come across a bit crazy. But today is not tomorrow and Friedman (and I) was (were) just talking geopolitics.